The never changing penultimate signature scene gets me every time because I know another fantastic episode has come to an end and I will have to wait an entire week to get my fix: through the branches of the trees in rural Virginia, the two storey family home, complete with porch emerges, enveloped by the night sky. Voices can be heard coming from inside the house as the family muse over recent happenings. There is total darkness except for the lights in a couple of the bedrooms, which are all eventually turned off as the family bid each good night before the soft strains of the feel-good theme tune can be heard.

That’s right; it could only be the formidable Walton family. If that glorious theme tune could be on the soundtrack to my childhood, then the show itself must be part of the footage. When I was a kid it was compelling Sunday afternoon viewing that my family and I used to watch after Sunday mass. Back then I didn’t know anyone who didn’t watch The Waltons. I didn’t know anyone who didn’t like The Waltons. Sadly, at the time, I was too young to appreciate what fine quality viewing the show was and probably thought that television would always be that way. It was sensitively written; beautifully acted, and contained scenes of the breathtaking Virginian countryside. There was usually a moral in every episode, along with depictions of hard work; family values; helping the community and genuine religious reverence.  However, I am now old enough to realise that they don’t make them like that any more. The constant stream of mindless drivel on television these days (Dear Lord, not another daft reality TV show) explains why I hardly ever watch television nowadays. I’m almost certain that the world would be a better place if we had more shows like this. Writers and producers, take note!

And of course, a TV series based on nostalgic reminiscings – from the narrations of a middle aged John-Boy Walton during the opening and closing scenes of every episode – can only be a good thing for a sentimental old fool like myself. Incidentally, John-Boy was a character I could identify with as, like me, he was the eldest; he took care of his younger siblings, and he had a deep desire to write. He ended up achieving his goal. Good for you John -Boy!

Clearly, I’m not the only one for whom the show brings back fond memories. The recent reunion of  the cast of The Waltons brought hoardes of the shows fans to the streets of Los Angeles proving that Walton-mania is still very much alive and kicking thirty one years after the last episode was broadcast. The reunion was to celebrate the show’s fortieth anniversary – although many of the cast do not look old enough to be celebrating such a milestone! Unfortunately Richard Thomas (the well loved John Boy) and Michael Learned were notably absent due to prior commitments but fans were ecstatic to see the rest of the cast.

Oh how I would love to return to Walton’s Mountain; a world where children looked and behaved like children; elders were respected and cared for; family members looked out for each other; people in the community helped each other out; kindness was shown to strangers and religion was not a dirty word. And not a bare bum in sight! Who said you shouldn’t pay attention to everything you see on TV?

Posted by darkangelrocks on October 23, 2012 in TV Shows

My little niece and nephew can’t get enough of their favourite children’s characters: Dora…Ben and Holly… and don’t even get me started on Elsa! In years to come when they’re much older, they’ll look back at the films, cartoons, books and other memorabilia, and it should bring back happy memories of these early years.  That’s what happens whenever I see anything that reminds me of Victoria Plum. It’s more than likely that no one under the age of twenty five has ever heard of Victoria Plum – and those over twenty five barely remember her. But I have never forgotten her.

Victoria Plum started out life as the central character in a series of illustrated children’s book which were written by – and I didn’t know this til much later – Angela ‘Come Dancing’ Rippon. Of course back then, I was too young to know who was writing these books. And to be honest I don’t think I cared. But I did know who the lovely Angela Rippon was. I knew her as the very nice lady on the TV-AM sofa who I used to watch while Mum got me ready for school, and much later of course she was known as the presenter of Come Dancing. The nation may go crazy over Strictly Come Dancing, but for me it was always about the Tower Ballroom, Blackpool. And the lovely Karen and Marcus Hilton. Boy could they dance…

But enough about sequins and glitter. Children loved tales about the little woodland fairy who lived in a magical wood with all her enchanting little friends. For a while, Plum-mania was everywhere and you couldn’t move for all the VP merchandise that was on sale. I had some myself including the bag; the umbrella; the rain mac, the all important books and enough stationary for me to rival WH Smith. Sadly, I never had the doll but I suppose you can’t have everything! And what’s even more sad is that instead of hanging on to the memorabilia, it all got thrown away. I’m sure Mum got sick of tripping over all my toys and things and got rid of the lot and that included all my Victoria Plum goodies! But I am very happy to say that I have now set about trying to replace my lost items, and am now the proud owner of a VP jigsaw puzzle, some books, curtains and bedding – and I will not be parting with those in a hurry! 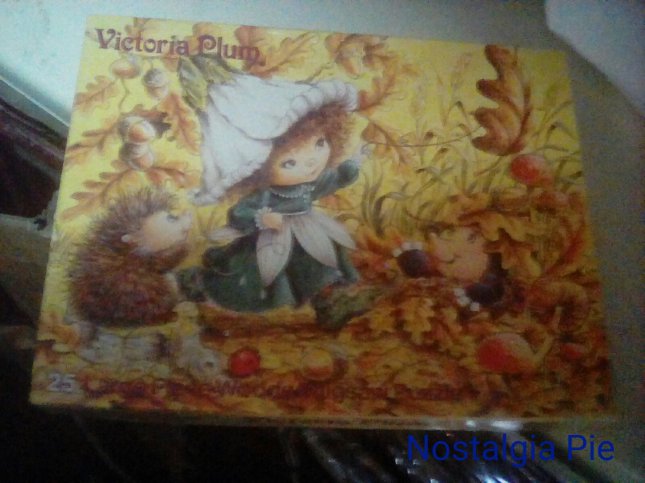 It’s just as well that everyone got a big slice of the Plum pie while they could because from being everywhere, Victoria Plum was suddenly… nowhere to be seen. In comparison to other children’s characters,  the success of Victoria Plum at being a children’s phenomenon was extremely flash-in-the-pan, and she has the most unenviable privilege of being one of the most underrated children’s characters. It’s such a shame because there was so much that could have been done with the character. We could have had the cartoon series; the movie; the theme park. the clothing line; the cosmetic line…  But now we have to make do with Bratz!

Thankfully though, Victoria Plum appears to be entrenched in the childhood memories of people other than me as testified by the 407 people who ‘like’ the Victoria Plum page on Facebook. Am I one of them? Do you have to ask!

Posted by darkangelrocks on October 17, 2012 in Childhood Legends