Bored Of Board Games? Never!

Christmas is about to descend on us very soon and for me nothing screams Christmas more than… board games! Or any sort of indoor games that can be played at the dining table actually. Why? Because until I reached my late teens, I was guaranteed at least one board game every Christmas. In fact one year I got nothing but board games – and some of them had been duplicated as well (that wasn’t a good year!) but my aunts and uncles knew I enjoyed playing such games with my siblings and it was the cause of many great bonding moments between me and my immediate family – and at times such as family gatherings, with my extended family too.

Kids today are still very much into games. But today’s games are often electrically-powered and need to be played via a screen of some kind while pressing a multitude of buttons. I’ve been told by those who consider themselves experts that it’s great fun. Maybe it is but I still prefer games that were ‘made in the days before electricity’ as my younger brother – and computer game addict- would say. Not only were those games thoroughly enjoyable but they had a social element which I feel that today’s games don’t have. Nothing beats having your family gathered around the table all shouting, screaming and laughing – and those are the ones who aren’t even playing!

Opening the box to a new board game was always an exciting moment. We loved checking out the board; looking the pieces; familiarising ourselves with the rules before trying it out for the first time. However, you can forget about the game being in a playable state a year later: most of the pieces would be missing and one of my younger siblings would have scribbled all over the board! Maybe that’s why we got so many of the same board games over the years…

So here’s a list of traditional games I have received, played and loved during Christmases past. Which reminds me, I really need to build up my board games collection again… even if I am the only one playing them!

Who hasn’t played a game of Snakes and Ladders? This was probably our most-received board game and let’s face it – you can’t go wrong with Snakes and Ladders! It might be simple enough in concept (roll the dice; make your move; drop down if you land on a snake; move up if you land on ladder) but it’s great fun and the game can continue for quite a long time.

My favourite version of this game which originated in India, is one that had a moral element to it. The design on the board focuses on children learning the moral consequences of their actions. The ladders represent good virtues such as hard work, generosity and kindness while the snakes represent vices like carelessness, extravagance and vanity. The top of the ladder or bottom of the snake show the consequences of such virtues or vices with the final square showing a child enjoying a reward. Not only is it fun but also educational (I personally feel there are a few people who could benefit from playing this!)

Another game we’ve played a million times and boredom (or boardom even) has still not set in! Like Snakes and Ladders, Ludo originated in India and is based on a game called Pachisi. Unlike Snakes and Ladders which can have an unlimited number of players, Ludo is game played between 2-4 people although we tended to divide the people who wanted to play into four teams rather than individual players.

As I have three siblings, this was the perfect game for us – and sometimes Mum joined in too. In fact I’m sure it was Mum who taught us how to play. We always had great fun playing  Ludo – until all the pieces started to go missing one by one…

I probably played Guess Who? for the first time when I was about 7 – and I loved it. I think we must have received this game four times or more which is just as well considering we were forever losing the cards! A two-player game, you have to use your powers of deduction and memory, to find out who the mystery character on your opponent’s card is. You can ask questions only of the yes/no variety as part of the elimination process.

Guess Who? as I remember the game.

The game still exists but over the years it has undergone a bit of a revamp and characters now include pets as well as people. Furthermore you can also go online to download more characters. So glad that a new generation of players can still play Guess Who?

The Waddington’s murder-mystery themed board game known as Clue in North America was a huge hit in our household. We received two of these board games on two separate occasions and I remember around that time in the early 1990s, there was also a television series based on this popular board game, starring Jerry Hall as Miss Scarlett which we always used to watch. It was a very interesting and intriguing game which once again used powers of deduction and elimination.

The aim of the game is for six players to assume the identity of one of the game’s six colourfully named characters including Mrs. Peacock and Professor Plum and move around the board, representing the rooms of a mansion. They have to collect clues in order to deduce not only who murdered the victim, Dr. Black, but with which weapon and in what room.

Cluedo was great fun but if I’m honest we loved the show a little bit more because it had that much more drama!

A universal classic, who couldn’t love Scrabble? I was an avid bookworm who loved to write, create stories and learn new words, so my family knew that Scrabble was the game for me. Which explains why I received this board game many, many times. One year I received it three times, including the magnetic, travel version which I did use on a flight. Of course it was just as well that I was given so many sets of the same game as, you’ve guessed it, I kept losing the pieces!

The objective of the game is for players to score points by placing tiles, bearing a single letter, onto a game board which is divided into a grid of squares. The tiles must form words – which must be defined in a standard dictionary –  which must flow from left to right in rows or downwards in columns.

This was without a doubt one of my favourite games and one which brought out my competitive streak and I have to say I’ve very rarely been beaten – but put me against a Scrabble champion and it might be a different story!

We’ve received a compendium of games, again on more than one occasion. Anyone who thought of doing this was extremely clever because they were in fact buying us fifty games for the price of one! A compendium of games contained many well-loved, popular games including:

… and more! We had hours of fun but to be honest probably played about five out of the fifty games!

Based on the well-known ITV quiz show hosted by the legendary Bob Holness, I was given the board game version of Blockbusters one Christmas. I had – and still have – a head for trivia so it was a great gift idea for me. I used to watch the long-running quiz show with my granddad and knew how the game worked in which contestants had to complete a line across a board of hexagons after successfully answering questions. I actually opened the box expecting to find an electric board with flashing lights (I was just a kid!) so naturally I was a bit disappointed that there was just a regular board with plastic pieces used to for a line. 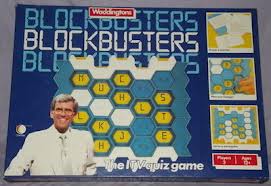 Unfortunately, it wasn’t a game that my siblings – or anyone else for that matter – wanted to play (probably too intellectual for them!) So I had to settle for answering the questions on the cards provided by myself!

This game was a massive hit with my family, my dad in particular. Any Connect Four game we played was destined to be extremely loud and would go on for hours. We often got this game out at family parties and most people were only too willing to have a go. 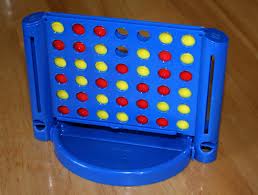 It’s a two-player game and the aim of the game is for each player to drop a disc into a vertically suspended grid and the first person to complete a row of four discs was the winner. Simple concept but huge amounts of fun – and noise!

This was a game my sister received one year which I was pleased about because I’d always wanted to play Dream Phone. It was similar to Guess Who? in that you had to use deduction and the process of elimination to figure out who the secret admirer is using clues obtained from the phone’s handset.

The game looked great when it was being advertised on television and being a real girly-girl, it seemed perfect for me. But when I finally got to play it, it didn’t really live up to my expectations. I think it might have been more enjoyable had I been slightly younger and into make-believe – or slightly older and into boys! Though I’d still recommend Dream Phone as a great game to bring out girly get-togethers, sleepovers etc.

I must have been really young when I received Perfection (the game sadly not the quality!) because I only vaguely remember playing this. The game consists of different shaped pieces which have to be pushed down into the correctly shaped holes on the board before the time limit runs out. When time runs out, the board springs up, causing many, if not all, of the pieces to fly out.

I was a right slow coach as a kid which might explain why I remember pieces flying everywhere!

Many of these games are still available having been revamped and given a new look for the twenty-first century. Even though an old fuddy-duddy like me wishes that they had left the original intact (it was fine as it was!) I’m glad that they are still around for a new generation of kids to experience. If only they’d leave that Wii alone!

Posted by darkangelrocks on December 22, 2013 in Toys and Games