It dawned on me today that it’s been twenty years since World Cup ’98. Apart from the realization that I’m getting better at maths it brought back memories of what I consider to be the best match I’ve ever watched – the quarter finals where England took on Argentina and lost thus ending the dream of England taking home the cup. Everyone has their own opinion about what they consider to be the best match they’ve ever seen, and my choice where England got knocked out of the tournament might be considered a strange one – but boy where do I begin???

England captain Shearer, Beckham, Anderton and Scholes… Just some of the greats!

Everyone who knows me knows I’m hardly what you would call sports mad. I don’t know the first thing about football and if you need someone to tell you what the offside rule is, I better not be your phone -a-friend! But the England vs Argentina quarter final game was the very first time that I’d sat down with my family and watched an entire match. The first time I’d watched England play a major game. The first time I realized why it was called the beautiful game; the pride fans feel when they watch their country play, the glory, agony, ecstasy, and everything in between that every football fan experiences. It’s so much more than just kicking a ball around or taking home a trophy. It’s about sportsmanship, pride and honour – all this from someone who still doesn’t consider herself a football fan!

I don’t have a sporting bone in my body so I’ll probably never be a fully fledged fan like most of my family. But from that match on, I developed a new-found sense of respect for the game. I may not necessarily support anyone at club level but I’m most definitely an England supporter through and through.

I still remember my family gathering around the living room after dinner to watch the match. My brother was in his England shirt, and my mum who’s even less of a sports fan than me was pretty much jumping up and down with excitement. To this day, I still don’t know if I was watching a football match or a soap episode: team captain Alan Shearer elbowing opponents in the face with a smirk (come on Alan, you know you did!) Sol Campbell ‘s disallowed goal; Darren Anderton running around the pitch like his life depended on it even though  he looked as though he was going to drop. But most shocking of all was David Beckham’s red card after lashing out at Diego Simeone – an incident that many fans feel prevented Glenn Hoddles’ boys from progressing further in the tournament. David got a real thrashing in the press and  I still remember the next day’s headlines: “10 brave lions. 1 stupid boy.” Posh Spice pleaded with the nation to go easy on David, saying that he didn’t deserve to be the most hated man in England. I may be in the minority but I actually agree with her as I think David’s subsequent treatment was very unfair. But hey – that’s just my non-expert opinion!

Honestly, I had no idea football could be so dramatic! And that’s before we even get to that penalty shoot-out. I didn’t realize it at the time but I think most of the nation knew it was over when it went to penalties. Let’s face it – England don’t do too well when it comes to penalties. We would have to wait until 2018 for the ‘curse’ to be broken (thanks Pickford!) But I think I that’s why I loved this match so much – that passion from the England team. That energy, that hunger to win. And to be honest I don’t think I’ve seen it since.

What amazes me now is where the last  twenty years have gone – World Cup ’98 was only yesterday surely! Even though the names Vardy,  Kane, Alli, and Sterling are on everyone’s lips, for me I still keep thinking Shearer, Owen, Ince, and Seaman. My parents had Charlton, Moore, Best (yes, I know he’s Irish but he was still one of the top players back in the day!) and Stiles but for me the 1998 England squad plus Gazza – who never should have been excluded – are the players of my generation. Sadly I can’t get my head around the fact that all those players have now retired. Aside from the fact that I realize how many years have gone by, I also realize that I’m old!  But at least that Southgate is still hanging about! Who would have thought back in 1998 that we would see Gareth Southgate leading the future England squad into the semis – the first since 1990? In twenty years time, the kids of today will be looking at the 2018 England squad as the football legends of their generation the same way the 1998 squad are of mine.

The 1998 World Cup was won by the host nation, France. Football may not have come home that year but I know I was a different person by the end of that game. As a Brit now living in America, I still feel that sense of pride in my country and in my national football team. People often talk about which stars would feature in their ultimate band, but if we’re going to talk about the ultimate England squad, then it would be the 1998 line up without any changes. Although at the very least I would have Gaza’s as a sub! I hope the squad tomorrow play with the same passion, fire, and determination as ‘my’ team. 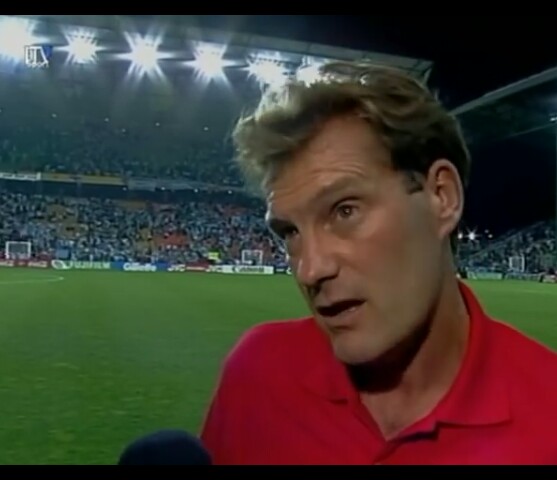 Glenn Hoddle, distraught after the game

Posted by darkangelrocks on July 11, 2018 in Sport

I often stumble across things from my childhood years which not only have I forgotten about but now that I’ve rediscovered them, I can’t believe I ever forgot them in the first place! I often get asked why I started this blog and here’s the reason why: I love unearthing things from my forgotten past and the excited buzz I get from it as I go, “ooh! I remember that!” And from some of the comments I’ve received, I know that I’m not the only one. Good old fashioned nostalgia – you just can’t beat it!

So I could hardly contain my excitement when I came across the television commercials for cream cakes from the 1980s (though they began in the 1970s but I won’t remember those) which had the ‘naughty but nice!’ slogan. I remember seeing these on television when I was very young – during a time when television ads were as entertaining as the actual television shows themselves! Watching them again, many, many years later, it seemed to me initially as though they were advertising cream cakes in general and not cream cakes by a particular brand. What they were actually doing was advertising dairy – and the ideology that it was OK to treat yourself to something wickedly calorific every now and again.

Back in the 1970s and 1980s there was a television and press advertisement campaign of which cream cakes were the subject. This ad campaign was sponsored by The National Dairy Council in association with the now defunct Milk Marketing Board. I was also surprised to learn that the ‘naughty but nice!’ slogan was coined by a humble, little known, young copywriter named Salman Rushdie!

The television commercials featured a host of the day’s well known stars including Larry Grayson, Les Dawson and the ever popular Barbara Windsor. As much as I am in favour of healthy eating which is very much the consensus in the twenty first century, I think it’s so deliciously refreshing to come across a campaign telling the public that it’s all right to indulge yourself every once in a while. I remembered the advert featuring Barbara Windsor especially well which surprised me a great deal as I was only little back then – well even more little than I am now! It brought back a lot of memories – not to mention hunger pains so I will be off to track down some yummy – or naughty but nice I should say – cream cakes!